How can we help you today?

End of year / Start of year

This document will provide information in regards to the new intake and leavers for the new academic year.

For schools that run a full import to provision rooms

At the end of the school year:

For schools with no import:

At the end of the school year:

For schools that run a full import that provision rooms

At the start of the new year:

For schools that run a full import that provision rooms

At the start of the new year:

General tidy and clean up

Whether the room is to be stored as an archive for the students and teachers, copied to a new group, having a new group enrolled, or even deleted, a general tidy up is advised. This is a job for the teachers with access to the room and some knowledge of its contents, as they are the ones who know what's worth keeping and what should be discarded.

The tidying procedures and decisions are the same regardless of whether the room is imported or manually created.

If the room is to be deleted:

If the room is to be archived for storage (not to be re-used in the new school year):

The tool for deleting unused imported rooms can be accessed by top administrators from anywhere within Fronter's tree structure. In Admin, choose the correct node on the left hand side, then choose 'Clean up old imported data' under Tools. Click on the tab 'Clean up unused imported rooms' and you will be presented with a list of unused rooms that can be deleted. A delete button is underneath the list. You can manually select the rooms you want to delete, or choose to delete all at once. When you click 'Delete', the selected rooms will be permanently deleted from you building. 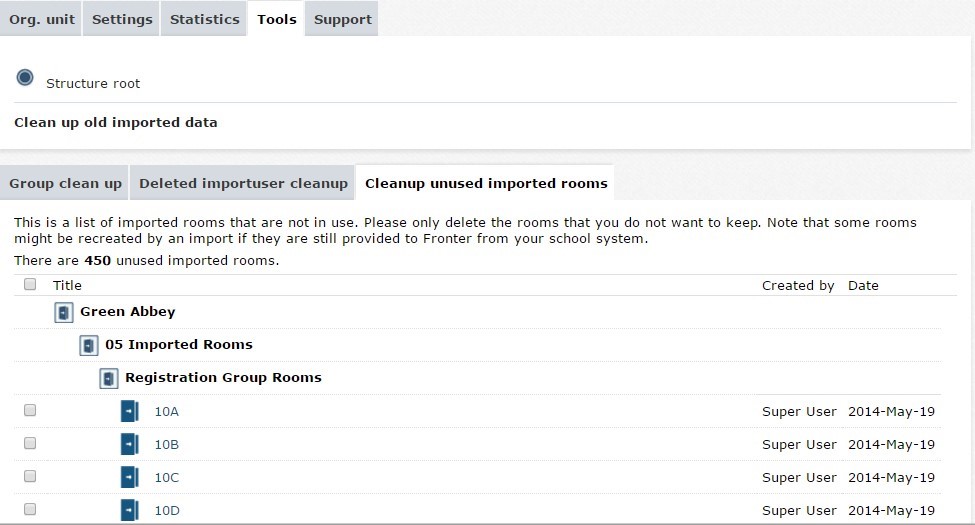 To stop the import, select the required node in the admin structure tree where your import is set up (can be a school node or top node). Then select the Tools tab and click Fronter integration setup. 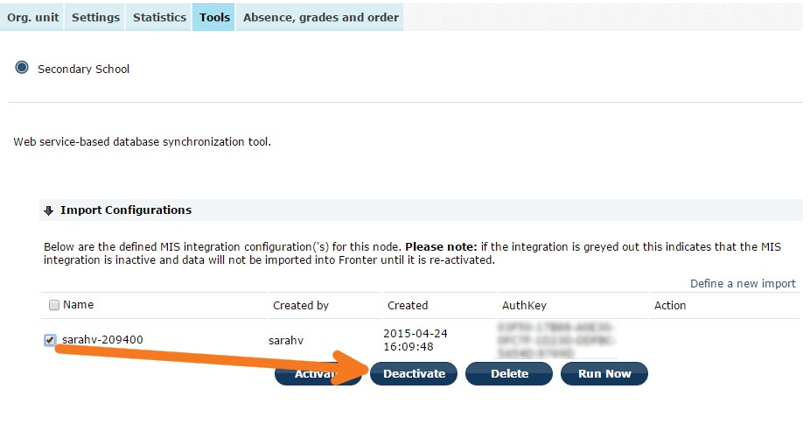 Note: In some buildings, Fronter will start and stop the import on behalf of your administrator. If you are not sure if you are one of them, please contact your local support team.

When the SAS is rolled over to the new school year, the import can be activated.

From the admin module, click the tab Tools, select the relevant import and click Activate (1). If your institution manually transfers files; do it at this point. If not, they just need to be available for Fronter to fetch. Make sure the import is still ticked and click Run now (2). The import should now run regularly (typically every night).

To see if the import has run and to see the log, go to https://ws.fronter.com/admin and log in with your Fronter admin credentials, entering your building name in the 'building' field. Should you get an error message, please contact your local support team.

If the import creates new rooms, they will be initially set to inactive. The teachers can activate their rooms themselves or an admin can do it on their behalf.

The teachers will see the rooms in the room selector, they will appear on the list as a normal room. They can select My rooms or Rooms not visited.

An administrator can open the rooms directly from the admin module.

How to activate the room - 6 options

When an administrator or a teacher who is the room owner clicks on the room title for the first time, she/he will get to select how the new room should be activated. The action cannot be undone, so they should know which choices to make before clicking Save. 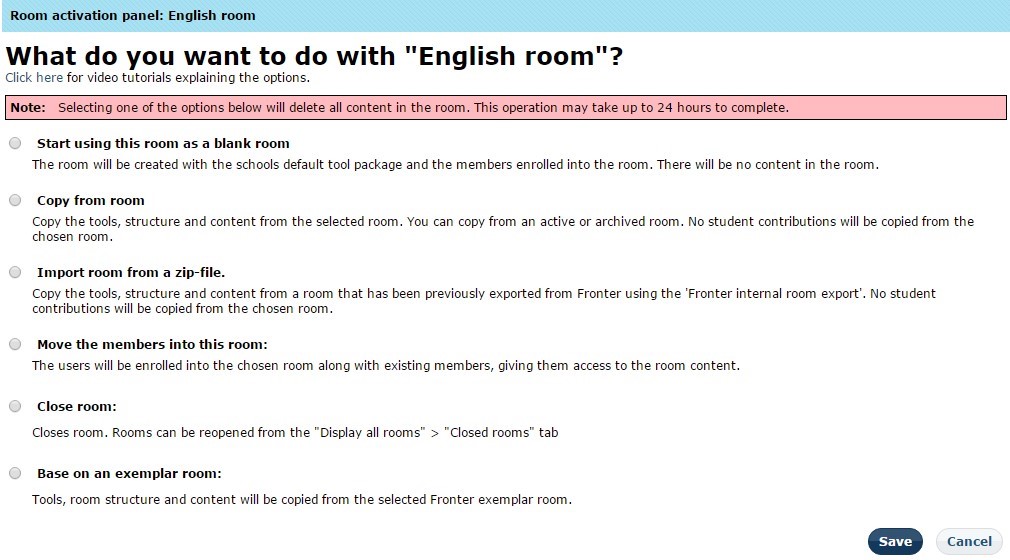 If the import creates more rooms than those that will be used by teachers and students, it makes sense to close the rooms to remove them from user's room lists. Do not delete the rooms, as they will just be re-created when the import updates.

Schools with no import

For schools with no import, there will be no activating of rooms since all rooms are created manually. But the new rooms can be copies from existing rooms, exemplar rooms or imported rooms (described in the Administrator guide, chapter 'Copy room'). Different schools have different systems. Some schools have continuing year rooms, and between the school years they resign the old members and enrol the new. For some schools a class will keep their rooms across several years, and some schools archive all rooms and manually create new ones every year.

If the teacher does not want the students to access the class room during the holidays, e.g. because she/he is preparing it for next year, the group access for the students in the room can be changed to 'No access' and then back to 'Write' when the school year starts.

For manual maintenance, it is advisable to give the groups and corridors descriptive names, like the year the students enter or leave school. This way the group names don't need to be changed every year and it's easy to see when archived or closed rooms should be deleted.

The two new functionalities were already released in August 2016, though maybe not seen by all customers yet.

These are functionalities for administrators.

For the Norwegian customers we had a webinar June 14 which is recorder and sent to the ones who participated.

You can also find it here: https://youtu.be/kwzgIxD5Nd4

Did you find it helpful? Yes No

Send feedback
Sorry we couldn't be helpful. Help us improve this article with your feedback.